Unauthorized Review: Make the most of the all-you-can-see Tallinn Card

City cards are your perfect opportunity to see a wide variety of places across a city or region for one flat fee. I love city cards — but you do have to take a close look at them to ensure they get you into the places you want to see.

While here in Tallinn, Estonia, we bought a couple of Tallinn Cards with our own money, which is why this is an unauthorized review and has zero affiliate links. Simply put, no one has paid me to write this post.

About the Tallinn City Card 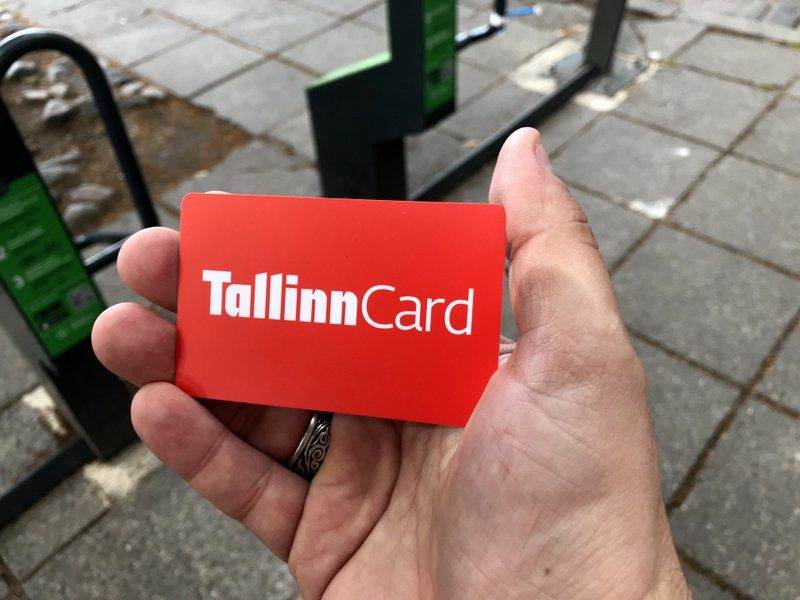 Like most city cards around the world, the capital of Estonia offers a 24, 48, or 72 hour card (starting from the first time you use it). The card covers fares on buses, trolleys, and trams, gets you into over 40 places around the city, and gives discounts at dozens of others. 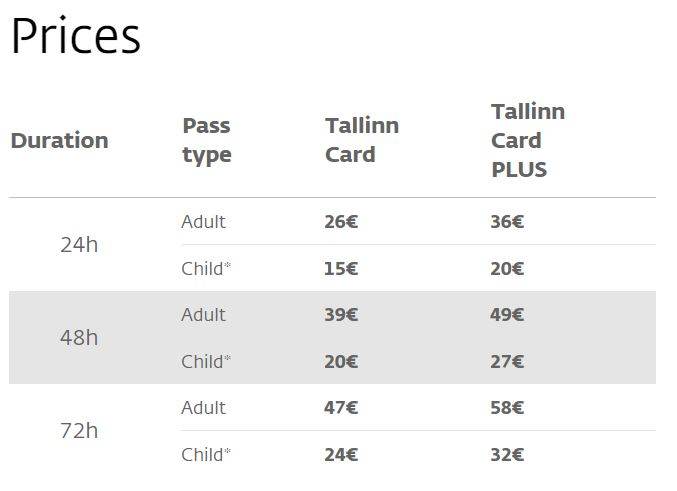 The Tallinn Card Plus card you see above adds in the touristy hop-on hop-off buses, a thing that in dozens of countries we’ve never really seen the point. No need to spend the extra 10-11€ unless you want to try them out, especially since the public transportation in the city is excellent.

We opted for the two-day cards, and in retrospect, we should have opted for the three-day cards. There’s that much to see. Everything you see below was reached in two fairly full days of travel.

Bear in mind this is only a fraction of the places available – see the whole list for yourself. Also, note that while the typical admission price for an adult is listed below, it’s free to enter with the Tallinn card.

The history of moving pictures 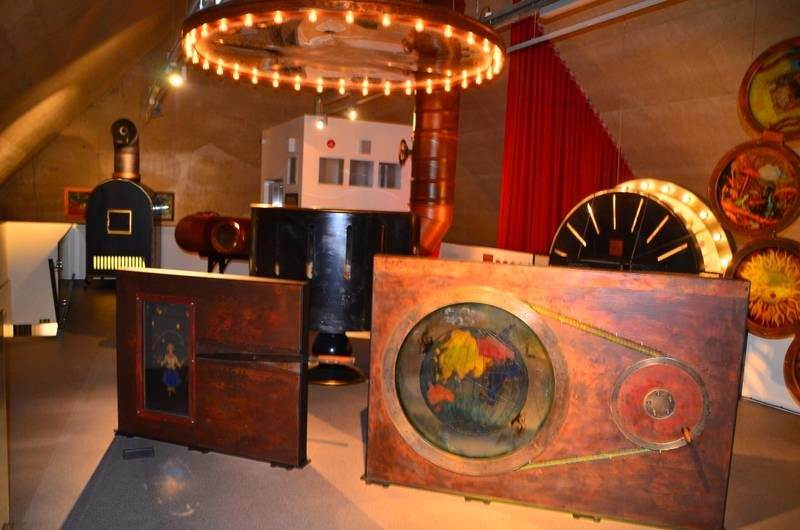 Covering a broad swath of history and technical details that go into making a movie, there’s a chance to try on some clothes, edit videos, and see some behind-the-scenes details. The highlights are all on the second floor, which house some old-school moving-picture technology. If you’ve been to other film museums, you might have seen a zoetrope (a rotating cylinder with slits to look inside) and other old-school machines like it. The ones here are huge and unique, as far as I’ve ever seen… I do wish there was a bit more focus on the Estonian films, as obscure as they’re likely to be for the average foreign tourist.

The Film Museum is part of a compound containing a History Museum (where my wife mentioned activities like learning the foxtrot, building a Soviet-style apartment, or riding a bike through Estonian cities) and some Soviet-era statues. I’d recommend either or both, depending on your interests — but don’t skip the Soviet-era statues either way. 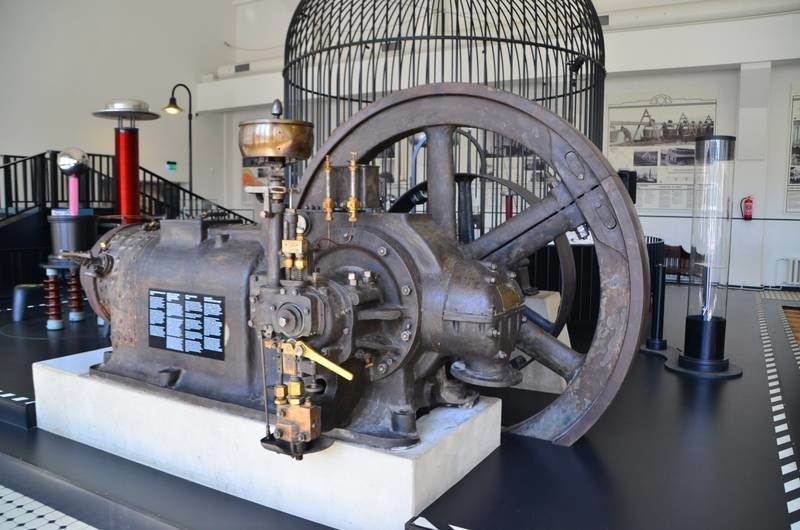 The Energy Discovery Center offers a wristband as your ticket – leave and come back in later that day if you choose. The picture above is from the upper floor, showing a monochromatic restoration of a former power plant with plenty of mad scientist moments.

For kids, the lower and ground floor will be the bigger highlights. Tons of interactive elements bring science to life and are seriously fun to play with. Look for the invisible harp near the stairs, which uses lasers instead of strings, and the voice modulators to sound very different from your usual self. Highly recommended. 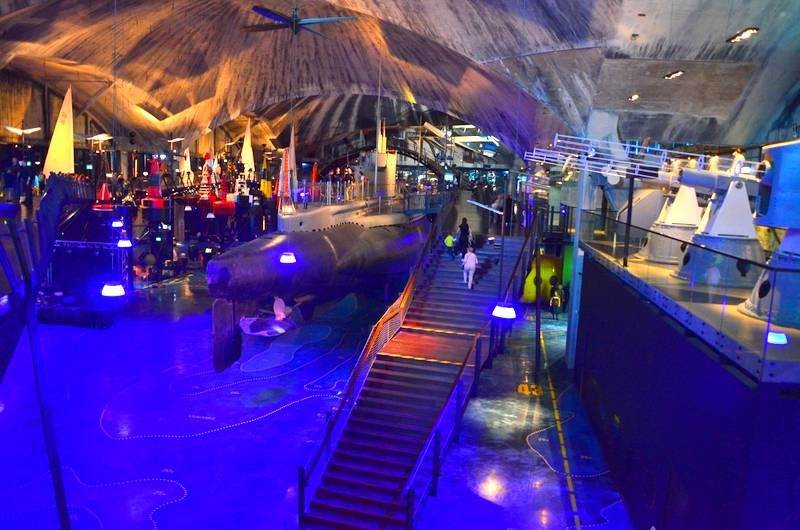 The Lennusdam Seaplane Harbor was built in 1916-17 and used to store or repair seaplanes. It’s almost vertigo-inducing, looking at the size of it all. Today’s museum houses a submarine first launched in 1936, a full-scale copy of an early 20th century seaplane, and a number of ships designed to skate along the ice instead of in the water.

It’s darker than I’d like, but is very well-designed to start you on the ‘surface level’ (actually a suspended bridge and ultimately take you to the ‘underwater level’ (the ground floor). Look for an icebreaker out in the quay. Recommended.

Explore the art of still photography 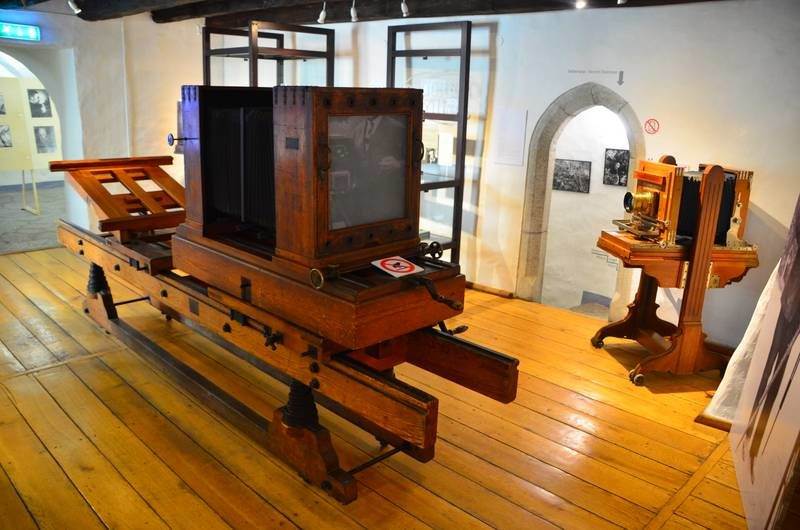 The Museum of Photography (AKA Fotomuseum) is in the heart of the old town, though this is more of a disadvantage. Sometimes a museum has to adapt to the space available to it, and this one’s limited by the location (and possibly the budget). Head up the awkwardly narrow and steep steps to the upper floor for a small selection of antiques cameras and a small exhibition of Estonian photographers. Head downstairs for what looked like some temporary exhibition space, then back to the ground floor for a look at an old-school darkroom. Give it 30 minutes if you’re in the area or into photography, but I’d otherwise pass.

See a great museum about your body

The Estonian Museum of Health has a tall order to fill — be an interactive, educational experience that somehow works for both school field trips and curious tourists. It was the first museum we visited with our Tallinn card, and it set the bar high with the little touches (look for the stools with patterns based on different microscopic photography patterns. Beyond a number of well-designed interactive exhibits that engaged the senses, look for an Estonian sex ed cartoon from the late 1980’s which could still be used today. Highly recommended.

The view from the TV Tower

It seems a lot of cities have TV towers that have become touristy — there’s a bit of history at play, but it’s second fiddle to a look at the rest of the city. Sadly, that view is a distant one — you’re about 10 kilometers from the old town as the crow flies, and about a 30 minute bus ride. Between that and a local city law that says no building in Tallinn can be built taller than St Olaf’s Church, the view is also a bit disappointing if you’re expecting skyscrapers.

An exhibition about DNA and chromosomes is interesting, and you can take a walk outside on a fenced balcony… but not all the way around, and a wire fence prevents clean photos except through small ‘windows’. Meh – I was disappointed and wouldn’t go back — it’s rather isolated from the rest of the touristy destinations.

Go on, have a drink? 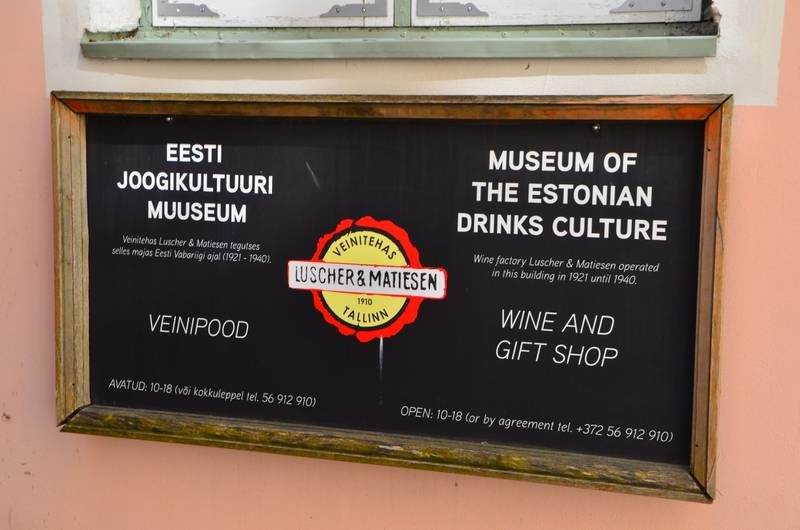 Despite showing up on two different days and this being in the old town, it was closed at times everything said it was open. A call revealed they’re having issues with understaffing and were closed most days in July (?!), despite being in a busy tourist area. To say we were baffled was an understatement. That’s not a knock against the Tallinn Card, but it’s a fail against a place that looked promising.

A bit of marzipan, anyone? 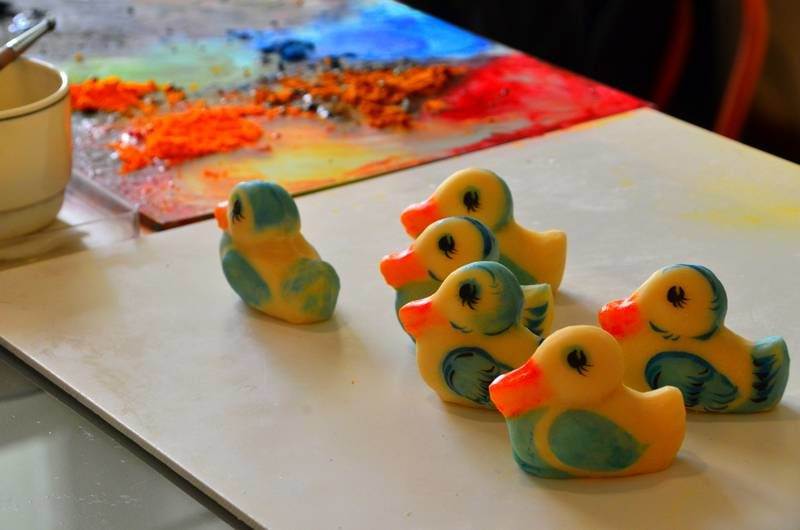 One part cafe, one part food painting studio, and one part chocolate shop, there’s no admission charge to enjoy he Marzipan room… but your Tallinn Card does get you a free small bar of chocolate. It’s also a chance to see hundreds of intricate figures, animals, and so on. Meh – cafe culture isn’t really my thing, but the painting station is cool enough.

The Tallinn Museum of Orders of Knighthood focuses on very specific type of award, usually given to politicians, fighters, or artists. A free audioguide is available, and I’d recommend it. Three rooms house awards from dozens of countries, and it’s interesting to compare and contrast the look of them. Look for the awards from Asia, since they differ quite a bit from the European ones. I wish they had more info on the people they were awarded to, not just the medals…  Recommended.

Get past the awkward name to enjoy some history 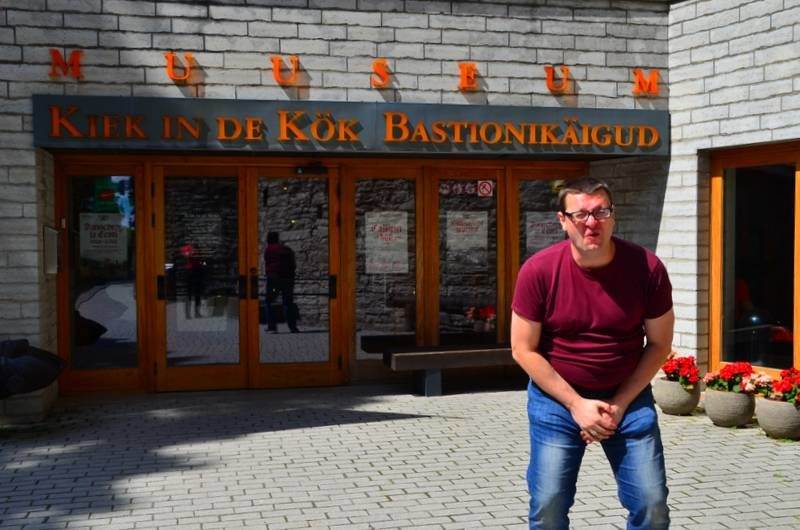 Yes, Kiek in de Kök is the real name for this artillery tower / fortifications museum. It’s Low German for ‘peek in the kitchen’, if you can believe it, but this several-story tower is only part of the story. The Maiden’s Tower, the bastion passages, and the Carved Stone Museum are all interconnected (but not particularly well-signed), so enjoy it all. 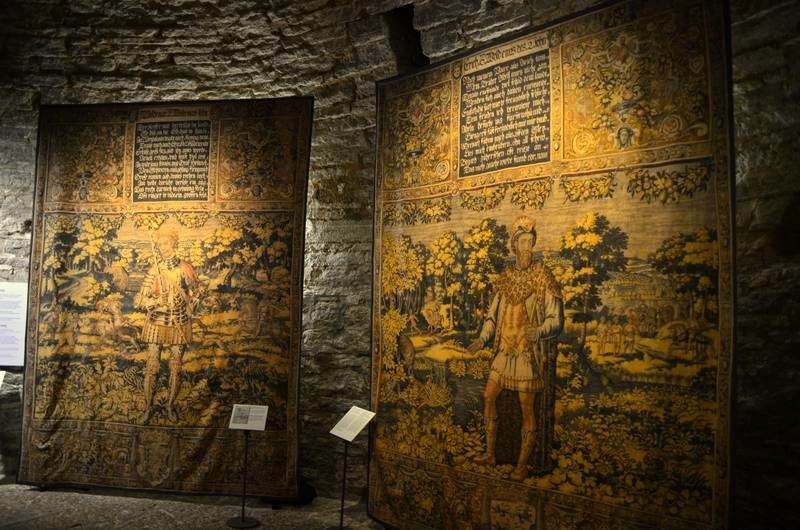 The bastion passages aim to take you back in time — but before entering, enjoy the animated history. While an unfortunate number of these are too serious for their own good, this was a rare one that made us both chuckle. The bastion itself is essentially a long set of doorless rooms, going back from a homeless guy that lived there to nuclear shelters, then going back centuries… From there, the Carved Stone Museum covers a section near the end before you’ll need to double-back. Watch your steps — there’s a lot of steps. Recommended.

See how a country found its freedom 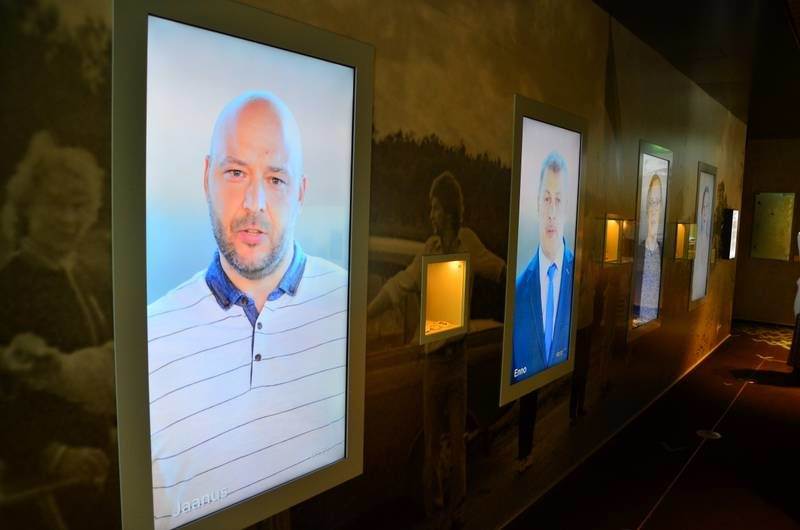 The Vabamu Museum of Occupations and Freedom offers a surprisingly philosophical view on the political history of the country. The first room offers a sober glimpse into the past, but thankfully moves on from that depressing past and through a carefully guided exhibition. 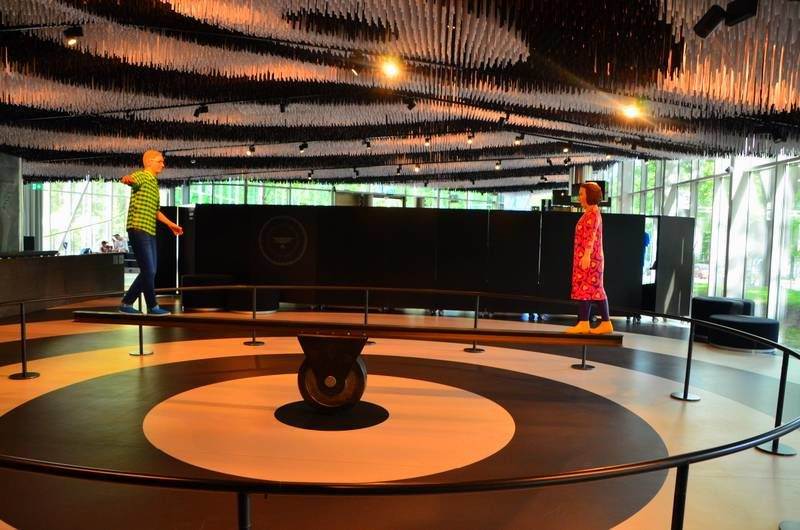 It’s worth noting the audioguide here is both free and basically the only way to fly. The smartphone device automatically senses which track to play, and you can read the transcript or more about specific exhibits in seven languages on the device if you prefer. Highly recommended.

The basement where the KGB held interrogations 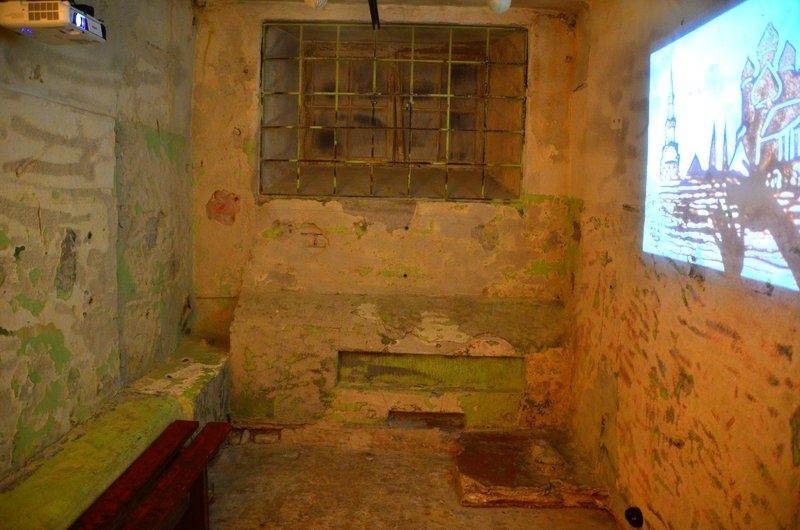 Opened to the paying public in 2017, the KGB had prison cells and held interrogations in this basement. Originally constructed as a residence in 1912, it’s since become a residence again in the upper floors, and I have to assume the residents know the building’s dark history.

To be honest, there’s very little here to see. There’s an ample number of text signs describing the history of the site, however and the cells certainly look like they haven’t been restored. Since the museum is still so new, and possibly because there’s some hesitation about awakening old wounds for the sake of creating a tourist attraction, it’s unclear what form this museum may change into. I’d give it a pass unless you’re really into history.

All told, I would have spent at least 96 euros on all the places we got to above (and it would’ve gone over 100 if we had entered the drinks museum). Not bad for a 39 euro card, which paid for itself after 3 of the more expensive museums. That the card gives some discounts elsewhere means you may save even more, providing you go to the correct restaurants or shops.

Been to Tallinn? Use the card? What did you think?